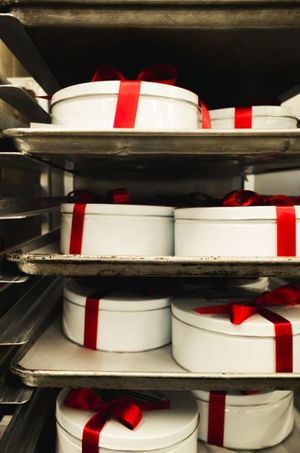 The frenetic holiday baking is finally winding down over here at TFB. About this time each year, I'm reminded that things are about to clear out on Christmas Eve. Traffic will die down and folks will settle in with their family and friends.

I suppose I always feel a little melancholy as the high season comes to a close. I love having all of you in the shop, picking up holiday swag. The connections established in the small conversations over the counter feel a little brighter and more intimate. And as much as I enjoy the ensuing quiet, it's still hard to let go of that addictive energy that has built in the bakery in recent weeks.

Back in the old days at TFB, this slowdown in bakery madness was also the lead up to one last big event - a thing I looked forward to each year: Maline's Christmas party.

Maline and my mom were sorority sisters at UT in the late 1950s, and I think it's fair to say that she has always been a wee bit eccentric. That is, if keeping a parrot in the foyer, a pet monkey named Clarence out on the upstairs patio, a host of Siamese cats (or maybe they were Burmese...), and a full pack of Prince Charles spaniels strikes you as eccentric. When I first learned about Frida Kahlo in art history class, my immediate thought was that Frida must've been influenced by Maline.

Though I didn't always see that much of her during the year, for at least two decades, she and her husband Dudley hosted a magnificent Christmas Eve gathering at their elegant adobe home on Scenic Drive, overlooking the lagoon across from the museum.

There were no invitations to this party - you just went. It was what one did on Christmas Eve. The funny thing is that when Maline finally decided to end the tradition a few years ago, she had to issue, in effect, "anti-invites" letting everyone know not to come. My guess is that for the next year or two, she probably still had stragglers show up at her door who hadn't gotten the word.

Arriving at Maline's on Christmas Eve was an adventure. You would walk into a dining area that sat above their long rectangular living room with its floor to ceiling windows and view out over the lake. And the long dining table would be set with a fairly standard array of holiday snacks - cheeses, maybe a Christmas ham, or some tamales.

On display in the center of the table was inevitably a glass Pyrex dish full of Jello. And every year, the Jello had a creative element - usually dolls standing, their feet encased in the clear gelatin. One rather famous year, we arrived to find a Michael Jordan doll - basketball in one hand, decked out in his number 23 Bulls uniform. Across the Pyrex was a nude Barbie stranded like Mike, ankle deep in red Jello.

Oh well, carry on - nothing to see there. Pretty sure I acted as if I saw that kind of thing every day. I probably picked my way through the crowd over to the hidden cabinet in the bookcase, where I happened to know Dudley kept the Scotch. My memories of that party will always be inextricably linked to a combination of physical exhaustion from the weeks of baking, and the wonderful sensation of whiskey and slowly melting ice cubes on my tongue.

Part of the fun of the party was its multigenerational attendance. My parents' generation was there in force, along with a host of friends and acquaintances around the same age as my brothers and me. And there were even a few babies - the next generation brought along to meet their community.

And I guess that's what I really loved - the feeling that I was connected to this wide group of people with history and a strong sense of place in my town. We moved a lot when I was young, and this was as rooted as I could imagine feeling.

At some point, things would begin to quiet down and we would know it was time to go. As tradition had it, a handful of us from the younger generation would head across town to the campus area where we would spend the rest of our evening drinking beer and talking trash late into the night. I have a clear memory of sitting on the patio of an almost empty Crown & Anchor Pub, pulling my long blue wool coat around me, my breath steaming in the cold air, happy to be sitting in that place with those people.

And being young and bulletproof, I would wake up the next morning, go have coffee with mom, and then head out for one of my favorite personal traditions - running a 10 mile loop through the deserted UT campus to Town Lake and back. The solitude of the empty campus and the eerily quiet downtown streets felt reviving, and got me ready for an afternoon of family and food.

We'll be open at TFB until 4pm on Sunday, Christmas Eve and closed on Monday, Christmas Day. I hope you can make it by this weekend, maybe pick up a few things for your own holiday party, and say hi.

Maline may have shut down her Christmas Eve party, and I may not run 10 miles on Christmas Day anymore. But the holiday still moves me, with all of its indelible memories, the way it brings us together, and its insistence that we focus in on the people that really matter.

PS - I called Maline this morning to check in before sending this email, and she told me that sadly Clarence the pet monkey passed away this past week at the ripe, but not ancient (by monkey standards) age of 40. He lived his later years in a place where he had more freedom to be outdoors and Maline said she had gone to visit him recently. She recalled, with a laugh that didn't conceal her sadness, that she had told him "Clarence, you look so old." Clarence had responded "Mommy, so do you." RIP Clarence. You were loved.