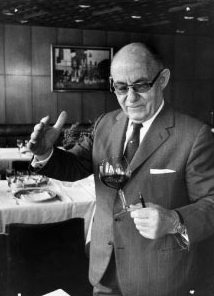 Falling in love with food - an origin story

Origin stories can be very powerful. Hollywood loves them. And every chef has his or her story of how they discovered their love of food and found their calling. Recently, brother Ben pointed me towards one of his favorites of the genre, the introduction to the late, great Judy Rodgers' Zuni Café Cookbook - which I must confess, I had not read.

In her introduction, Judy tells the story of her time in France in the 1970's, and how she fell in love not just with French cooking, but with a particularly French understanding of what good food is and how it can manifest into a truly good life.

Her story focuses on her experience at the three Michelin star restaurant Les Frères Troisgros in Burgundy. Staying with the Troisgros family on a high school exchange trip, she was permitted to hang around the kitchen, observe and transcribe recipes.

Judy was particularly taken with "le Patron," Jean-Baptiste, one half of the husband/wife team that originally opened the restaurant in 1935. While their sons Jean and Pierre ran the kitchen, Jean-Baptiste was the restaurant's famed and respected patriarch. Though he "could've ordered anything on or off the restaurant's menu," Judy writes, he "favored simple food and became utterly euphoric when presented with a carefully fried egg deglazed with sherry vinegar." He passionately warned her against "cinéma dans la cuisine," meaning the flashiness in the kitchen that was becoming a growing trend at that time.

Meanwhile, the "soeur," Madeleine, would make lunches for Judy at her home consisting of perfectly dressed salads followed, always, by one or two perfectly beautiful cheeses. Lunch was an art and a ritual - all things had their time and their place.

Troisgros was a place where Judy was able to learn discernment and good taste as emblematic of and essential to French culture and cuisine. Her experience at the restaurant taught her how to recognize a plate of food that embodied quiet soulfulness, authenticity, and balance.

This piece spoke to me of all that I've held most dear about food in particular, and life in general. It articulated my personal touchstone values more adroitly than anything I could hope to write. It also made clear to me that my very own Troisgros experience had been right in front of me the whole time I was growing up, though I failed to recognize it for what it was at the time.

My mother was (and still is) an astounding, sophisticated and wildly talented baker and cook. Her good taste and discerning palette taught me most of the things I value most deeply about food and its proper place in life. And truth be told, I had no idea at the time what I was learning. Mom knew intuitively what has taken me a lifetime to even begin to understand - how to approach cooking with restraint, humility, and great attention to the small details.

Growing up, Sunday night dinners often featured a humble soup of braised chicken, carrots, onion, potatoes, and maybe a hint of basil or oregano - a dish that would've done Julia Child or MFK Fisher proud. My response, often as not, was along the lines of "not boiled chicken again" followed, I'm sure, by a dismissive roll of my eyes.

My mother put Texas French Bread on the map with little more than an honest baguette, a few rather exceptional breakfast pastries, and a simple turkey sandwich made on freshly baked bread with sweet homemade mustard, mayonnaise, and lots of crisp pickles and onions. To this day, it's still one of my favorite things to eat.

But if I were going to write my own origin story - I think the place I would start was the Sunday afternoon I showed up at Rocky Creek (my mother's farm with her partner Laurence) a couple of years back and found Mom in the kitchen, hard at work on no fewer than 4 separate gazpacho recipes, each using a different combination of tomato, cucumber, peppers and onion.

Each of these was painstakingly chopped by hand. As I recall, two were bright yellow, while one was an orange the color of the sunset and a fourth was almost blood red. All of the tomatoes had come from her ample garden out behind the barn/playroom. I sat there on one of their white wooden stools at the big island in the center of their kitchen, sampling one gazpacho after another, wondering how each of them could be so distinct but so equally delicious. I knew that I could work on gazpacho for days and still might not come up with even one that was as balanced and perfect as any of the four she made that day.

If you have a chance, I would encourage you to read the introduction to Judy Rodgers' cookbook. You can get most of it with the "look inside" feature on Amazon, but it's a book worth owning. It's really a meditation on what makes a plate of food, or a moment with another person, truly valuable. I've been thinking about her story for weeks now, and I think that might be the mark of some good writing.

PS - Our Paulée dinner on Sunday is still booked, but please email us at info@texasfrenchbread.com to be added to the waitlist in chance of a last minute cancellation. We're looking forward to a truly lovely Sunday evening.